The Inductor PDR Baton is an optional heating attachment that allows technicians to remove soft dents by heating the panel behind the paint from the outside of the panel, relieving the stress holding the dent. This reduces the size of the dent significantly or eliminates it all together (metal composition dependent). This reduces labor and materials spent on traditional PDR or eliminates the need to outsource it.

How Does It Work?

The PDR Baton works as an extension of the Inductor Series, which is a powerful 2,000 watt, 120V line of induction heaters, which uses flameless heat to easily remove a variety of hardware and components.

Unlike traditional PDR or paintless dent removal, the flameless heat created by induction heating is the cleanest and fastest way for fixing hail dents, door dings and other minor soft dents. There is no need to meticulously massage out from the backside of vehicle panels, especially in hard-to-reach areas, or areas difficult to get behind.  The result is a clean dent repair in a fraction of the time compared to a conventional PDR tool.

A Competitive Advantage for You

The tool works so fast that mechanics and auto body shops can have the capacity to process softer dent repairs and be profitable. As a result of these efficiencies, the U-111 PDR Baton can help towards increased productivity, and ultimately profits, in your auto body shop. The U-111 PDR Baton comes with a 1 year warranty and 9 feet HF cable to inverter. 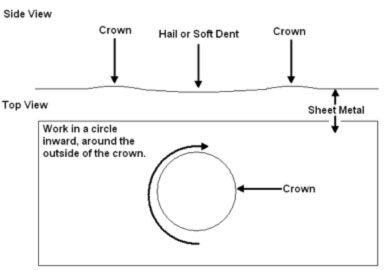 Contact us to learn more about removing hail dents, door dings and other soft dents with induction heating Hello. Thank you for your interest in the Inductor® line of products. This email list will keep you up to date with new product releases along with tips on product use. We do not solicit product or share your information from joining this list.